In the past six months, I have been inundated with requests from leaders about how to increase motivation in themselves and their teams. After further discussion, it becomes clear that the root of the problem isn’t a lack of motivation — it’s fatigue. In just about every training or leadership counseling session I hold, anywhere in the world, I see the impact of fatigue, that overall feeling of tiredness or lack of energy. A CEO snaps at a junior colleague over a relatively small error. A senior executive vents for an hour over nothing in particular. A consulting firm boss pushes junior team members to work 100-hour weeks over unsubstantiated concerns about client engagement. Strong leaders question if they are doing enough, even though they feel they are at the end of their tether.

These are all signs of sustained stress. None of these leaders would normally react this way. But lockdowns and restrictions on leaders’ typical means of relaxation, such as vacations, travel, and socializing, are taking their toll. The same is true for all employees: Long periods of stress and extended hours, without the usual ways of renewing energy, can and will elicit suboptimal, even damaging behaviors. Those behaviors compromise a team’s energy, efficiency, innovation, and ultimately their performance.

• More than 80 percent of 1,265 U.S. workers surveyed in June 2020 by Lyra Health and the nonprofit National Alliance of Healthcare Purchaser Coalitions said they had experienced negative emotions associated with poor mental health, with a third reporting clinical anxiety or depression.

• The same survey showed that 65 percent of respondents reported that mental health issues had impacted their ability to work, with 40 percent reporting being close to burnout.

• Data from the 2018 Mental Health Foundation survey of 4,619 people in the U.K. shows similar findings.

END_OF_DOCUMENT_TOKEN_TO_BE_REPLACED

P&C Insurance business is looking for a highly effective Product and Solution Owner to join the team. Our client believes there is always a better way. We look deeper, we find it, and we make it happen. We created a culture founded on core values of innovation, collaboration, excellence, integrity and respect.

As products and solutions are ready to bring to market, you will make it happen by setting the tone internally for selling motion as well as externally for future product expectations/roadmap as appropriate. Part of your measure of success will be the creation of best-in-class solutions to meet client’s current and future needs. In summary, your job responsibilities will include,

P&C Insurance business is looking for a highly effective Product and Solution Owner to join the team. In this role, you will lead the design, build and commercialization of new products and solutions by working with clients / prospects, internal stakeholders and EXL Digital Team to gather product or solution roadmap requirements, solution design it and apply those requirements to define and maintain product and solution roadmaps. You will dig deeper leveraging market analysis pundits and publications to define future direction of domain and digital trends to validate current product and solution roadmap assumptions and inform the evolution of those roadmaps. As products and solutions are ready to bring to market, you will make it happen by setting the tone internally for selling motion as well as externally for future product expectations/roadmap as appropriate. Part of your measure of success will be the creation of best-in-class solutions to meet client’s current and future needs.

In summary, your job responsibilities will include,

·Exposure to a wide variety of agile methodology and experience in multiple client environments. Experience in driving change and transformation projects is preferred 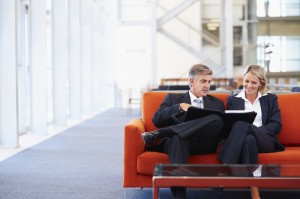 Over the past 14 months, organizations have had to navigate the abrupt discontinuity caused by COVID-19 and the ensuing regulations. Today, sports fans are returning to arenas and students are back in schools, but most office workers are still on work-from-home orders. Returning to the workplace will constitute a new normal, but what will that look like in an unknown post-COVID world?

I spoke to several CEOs, CIOs, and CISOs (all in the US) to understand how they fared over the past year – what went right, what didn’t go so well – and to learn their plans for reopening their offices for the majority of their employee base. The executives represent a cross-section of some of the most forward-thinkers in financial services, insurance, media, and technology. The comments I heard demonstrate the resilience and adaptability of corporate America.

Positive takeaways from the past year of work-from-home

While the pandemic affected everyone, it didn’t impact every company or industry the same way. Across the board, however, business leaders said that despite the tragedy of the situation, there were several positive outcomes. In particular, the forced remote work environment accelerated their corporate digital transformation, making them more competitive and putting them in a dynamic position sooner than planned.

END_OF_DOCUMENT_TOKEN_TO_BE_REPLACED

A novel management theory looks past individual leaders to constraints that might limit their effectiveness.

As a leader, you may sense the heavy mantle of work to be done, employees to motivate, bosses to impress, organizational culture to maneuver. Most leadership theories place all these burdens squarely on your shoulders: How you handle them all is entirely up to you. Concepts such as transparent leadership neglect external factors. Although leaders may be highly talented individuals, they are constrained by their environment and their own internal conditions.

Rather than making leaders solely responsible for their own effectiveness, we can allow a balance between managerial competences and the many constraints that limit leaders. With bounded leadership, we look past the leader’s characteristics and consider the many constraints they encounter at the individual, team, organisational and stakeholder levels.

Co-written with Andrzej Krzysztof Kozminski, Anna Baczynska and Michael Haenlein, our article in the European Management Journal found that leaders’ competencies are not enough for them to be effective. Our study of middle-level managers in Poland included 97 participants, around 57 percent of whom were men. Using focused questionnaires, we found clear indicators of their competencies and constraints. When we matched certain competencies with a specific set of constraints, we cleared the path for leaders to increase their effectiveness.

In bounded leadership, we see five distinct abilities leaders require to be effective:

END_OF_DOCUMENT_TOKEN_TO_BE_REPLACED

You’ve got to be able to talk to someone—but who? (Hint: It shouldn’t be the board.)

You’ve heard it before. “Leadership is lonely.” And while few people have great sympathy for executives who get paid good money for running an organization, loneliness is still loneliness, and it causes serious harm to leaders, the organizations they serve and the people in their lives.

What is the primary cause of this? For most, it comes down to having no real source of encouragement and appreciation for what they do. Yes, CEOs are often surrounded by assistants and subordinates who provide them with gratitude and praise. Good leaders know that this kind of attention is often shallow and insincere. But what about the attention that leaders get from customers, vendors, consultants, even the media? Praise from relative strangers does not reduce loneliness, and in many cases, actually exacerbates it. Ask most celebrities.

What CEOs want and need is specific and genuine appreciation—and correction—from people they care about and admire. Unfortunately, chief executives have no manager and are deprived of this. As bad as that may be, what may be worse is that so many resort to doing what that old country music song says: looking for love in all the wrong places.

One of those places is the boardroom. Too many CEOs I’ve known seek approval and appreciation from the board of directors (often, the chairman). This makes sense because after working for managers throughout their careers, the board seems like the next best thing to a boss—but the board is not a CEO’s boss.

Turning to the board for affirmation is like the head coach of a football team wanting the team owner to approve the plays he calls on the field. Any good team owner will be more interested in the results—winning games—than in the day-to-day decisions he makes to get there. And if the team doesn’t win, the owner will still fire the coach, regardless of whether he did things the way the owner might have wanted.

Boards exist to provide high-level guidance to CEOs and to prevent them from egregious errors. They are not meant to provide the kind of affirmation, coaching or approval that a manager does. That doesn’t take away from the fact that CEOs deserve support and need to find it somewhere. Just not there.

The next most likely place a CEO looks for appreciation is at home. This makes sense. A spouse might seem a healthy place for a leader to turn for the kind of informed approval a manager would normally provide. But even the most involved spouse can’t adequately understand the depth of a CEO’s accomplishments and challenges without being part of the day-to-day activities of work. At best, they can be a sounding board or a sympathetic ear.

Which leads to the worst thing that some leaders do when they lack appreciation at work and don’t get it from their spouse: They get involved in inappropriate intimate relationships with an employee. So many affairs take place, I’m convinced, because CEOs simply want to be valued and consoled by someone who understands what he or she is going through at work. The damage of these affairs, on organizations and families, is obvious.

There is only one place where chief executives can and should go to avoid the loneliness that is a big part of their job: their leadership team. Now, I am fully aware of the problems associated with looking for support from team members who are also subordinates. It can be dangerous for a CEO to seek affirmation from the very people he or she might one day have to fire. I get that. But it’s doable, with the proper mix of vulnerability, authority and maturity.

When CEOs build real, deep, vulnerability-based trust with team members and understand the different contexts of conversations they are having, they can get the support they need while maintaining the authority their role requires. And even if it presents occasional problems and challenges along the way, it’s a far better tightrope to walk than trying to earn the approval and consent of a board chair or a lone sympathetic employee.