By Tuck Rickards and Rhys Grossman 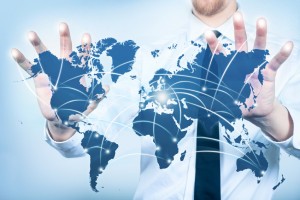 When the term digital transformation was first bandied about by consultants and business publications, its implications were more about keeping up and catching up than true transformation. Additionally, at first it was only applied to large, traditional organizations struggling, or experimenting, in an increasingly digital economy. But true digital transformation requires so much more. As evidenced by the recent Amazon acquisition of Whole Foods, we’re living in a new world.

Early transformation efforts were focused on initiatives: e-commerce, sensors/internet of things, applications, client and customer experience, and so on. Increasingly, our clients are coming to us as they realize that in order for these disparate initiatives to thrive, they need to undergo an end-to-end transformation, the success of which demands dramatic operational, structural, and cultural shifts.

We started tracking the role of digital in the boardroom in 2012. Our formal research echoes the sentiment we hear from our clients in every engagement: The board of directors has a vital role to play in digital transformation. Though 63% of executives say that the partnership of the board is critical to the success of transformation efforts, only 27% report that the board serves as an advocate for current strategies.

Early role descriptions for the addition of digital directors were focused on reacting to immediate disruption. These companies sought executives with experience running digital pure-play organizations, who would bring tech savvy and a Millennial mindset. Over the past five years, we’ve seen the role mature into four categories of leaders:

Although there continues to be a need for digital disruptors at the board level (think Stacy Brown-Philpot, CEO of TaskRabbit and director at HP and Nordstrom), increasingly we’re seeing and encouraging the appointment of leaders from the fourth category. As companies now look to incorporate their early digital investments into a more systematic, data-driven, end-to-end strategy, their leadership needs have evolved. Rather than placing an emphasis on disruptive forces, boards are increasingly seeking directors who bring operational capabilities and who could guide the re-engineering of the entire organization.

While digital directors must be able to communicate how advances in subjects like artificial intelligence and big data will ultimately affect the entire enterprise, we counsel our clients to be wary of “single issue” board members — the ability to contribute to all governance matters is a critical competency of any board appointment. There is a common misconception that digitally savvy executives (regardless of profile) are less experienced, and therefore not capable of this kind of breadth, when in fact the average digital director is only one year younger (57) than traditional directors. The scarcity of digital talent with CEO experience, however, has provided open-minded companies with the opportunity to shift the traditional makeup of the boardroom; women account for 58% of the digital nonexecutive directors (NEDs) recently added to boards. As a result, 37% of digital NEDs are women (although they are only 19% of total NEDs).

But digital directors cannot be the only voice on the subject of transformation. While these four profiles are the most common among the catalyst appointments we see, the distinction between digital and nondigital directors is breaking down. Nearly three decades into the internet revolution, executives across all industries are now digitally literate, if not fluent. As we transition into the hybrid phase of transformation — in which digital companies acquire brick-and-mortar businesses, and traditional businesses reorganize from end to end — it would behoove all directors to become more digitally cognizant.

Ultimately, we advise companies to look for leaders who have strategic, general management backgrounds; who can speak with authority on customer perspective, vision and strategy, and leadership and culture; but who also bring commercial and investment acumen. As boards are recognizing that directors don’t necessarily need to bring prior CEO or board experience, they’re realizing the opportunities provided by a fresh set of eyes. We recommend pairing new board members with veterans to learn the ropes and assimilate into the culture, and integrating digital discussions into all strategic conversations.

Digital transformation needs to be wholesale. Digital innovation needs to permeate and recast every aspect of the business and the board. Companies that do so will thrive in the new world, and those that do not, sooner or later, will fail.