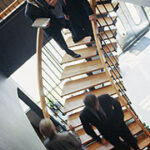 A couple of years ago I wrote about the value of having a workforce with a high degree of class diversity. The article focused on what are referred to as “social class transitioners,” who are people that have managed to progress between socioeconomic classes during their life, and it emerged that those who were able to do that brought particular value to the workplace.

“People who transition between classes can learn to relate to people in a more skilled way, and they are incredibly helpful in groups, as they can understand people from all walks of life,” argue researchers from the University of Virginia Darden School of Business. “However, it can also be an exhausting and even isolating experience for that person.”

Emerging early
This is far from easy to achieve, however, not least as Yale research shows that class bias can emerge as soon as we open our mouths. The study examined job interview scenarios and found that someone’s class and socioeconomic status can be discerned within the first few seconds of them opening their mouth. What’s more, the study shows that these snap judgments then impact the candidates that hiring managers prefer, with those from higher social classes picked more frequently than their working-class peers.

“Our study shows that even during the briefest interactions, a person’s speech patterns shape the way people perceive them, including assessing their competence and fitness for a job,” the researchers explain. “While most hiring managers would deny that a job candidate’s social class matters, in reality, the socioeconomic position of an applicant or their parents is being assessed within the first seconds they speak — a circumstance that limits economic mobility and perpetuates inequality.”

What’s more, a third study, from the University of Virginia’s Darden School of Business shows that people of higher social class tend to have an exaggerated belief in their abilities, especially compared to their lower-class peers. What’s more, this over-confidence often allows them to bluff their way into positions of power.

“Advantages beget advantages. Those who are born in upper-class echelons are likely to remain in the upper class, and high-earning entrepreneurs disproportionately originate from highly educated, well-to-do families,” the researchers explain. “Our research suggests that social class shapes the attitudes that people hold about their abilities and that, in turn, has important implications for how class hierarchies perpetuate from one generation to the next.”

Overcoming the class ceiling
So what can be done to improve matters? New research from Columbia University aims to understand how organizations can ensure that employees are operating on a more level playing field.

The authors highlight how rare it is for social class to be included in an organization’s diversity goals, with many treating the issue almost as a form of taboo. The disadvantages are considerable, however, not least in terms of understanding how businesses and universities work.

“The social class disadvantage comes mostly from lower cultural capital: not knowing how to do well in school and how to climb the career ladder,” the researchers say. “Individuals from lower social class origins can often get in the door, but don’t have the knowledge to succeed in college and on the managerial career ladder. They don’t have the mentors who can help them make the transition.”

The class gap
The researchers looked at various factors that contribute to our class, including the education and occupational prestige of our parents, as well as our self-identification and the estimated income of our parents.

The study found that the chances of gaining a managerial role were around 32% lower for people from lower classes than they were for people from higher classes. This chasm is even greater than the gap between men and women (28%) and African-Americans and white (25%).

It’s a situation that is clearly depriving organizations of many capable managers, not least as the authors argue that managers from lower classes are less likely to be arrogant and get too caught up in messy office politics.

“If we are better at using managerial talent, we grow as an economy, and there are more opportunities for everyone,” the researchers say. “It doesn’t have to come at the cost of the people who are advantaged.”

Starting early
Sadly, the researchers found that class-based disparities begin early on in life, with these gaps widening as we progress in our careers. This was highlighted in research from the University of York, which highlights that students from a working-class background are half as likely to attend one of the elite London, Oxford or Cambridge universities than their peers from wealthier backgrounds, even if their academic achievements are comparable.

The researchers analyzed data from the 35,000 students currently living in the UK who undertook a master’s degree after their initial degree. The majority stayed at the same university to continue their studies, but of those who did move, some 24% of those with wealthy parents went to ‘golden triangle’ universities. This compares to just 11% of those with poorer parents.

This gap persisted, even when students achieved a first-class degree. The authors suggest that part of the problem might be in securing funding for their postgraduate degree, which puts off students from poorer backgrounds.

“There is less mobility than we might expect, and those from advantaged backgrounds are much more likely to move institutions and to enroll in a master’s course in a golden triangle institution,” they say. “Institutional immobility varies significantly based on the socio-economic background of graduates. Among those graduates that were institutionally mobile, the odds of enrolling in a golden triangle university vary greatly by socioeconomic classification.”

This then extends into the workplace, with the Columbia team revealing that working-class workers are more likely to experience harassment, and are also more likely to be dependent on their job for their wellbeing. The poorer socio-economic circumstances of working-class people also prohibit them from enrolling in internship schemes to the same extent as their wealthier peers.

Despite this, there are precious few schemes to actually reduce social disparities in the workplace, with the researchers explaining that none of the top 50 companies lauded by DiversityInc for their diversity and inclusion efforts make specific mention of socio-economic status in their programs.

While there are efforts to improve matters, they are relatively few and far between when set against an economy whose diversity efforts are predominantly aimed elsewhere. It’s a situation that sees us all lose out.

“A disadvantaged lower class is a loss for society. It leaves a lot of value on the table when people who would be best at managing don’t have that opportunity,” the researchers conclude. “Addressing social class disparities is a way to make the world fairer, and to do it in a way that is positive for our collective good. It’s better for everyone.”